OHF WEEKLY, VOL 4 NO 43: Thoughts on America’s rush to return to the past; an exploration of the ways dominant groups portray themselves as heroes in historical narratives; OHF Magazine, No. 3: The Many Lives of Toni Morrison; and an invitation write with us.

Well, here we are. Just a few days before Election Day 2022 and the vibe in America feels way off-kilter. I can’t be the only one to notice. You see it, too. Right? Sure you do, unless you have a penchant for living in a dystopian version of Spielberg’s Back to the Future, in which case all’s right in your world. For Black, Indigenous, People of Color, and any other marginalized group, every day is a full-on Stephen King-Margaret Atwood-Squid Game mash-up.

Here’s my short list of beliefs that too many people are all too eager to cosign for at the ballot box and others are willing to let slide:

I don’t want to go back in time. My people and too many more have fought too hard and too long to cede one scintilla of our humanity. Or yours.

Back when the Earth was cooling from its creation, I was the only Black kid in seventh grade at a small private school on the other side of town. I was probably the only Little Person on that side of town. (Forty-eight inches tall, spondylo-epiphyseal dysplasia. Feel free to look it up. More on that here.) White people weren’t strangers to me. I had white teachers in elementary school. My father worked with white people, but attending Barney Academy was the first time I was immersed in a setting where I was the only Black kid in class.

White people fascinated me, probably as much I, a Black dwarfed teen with thick glasses and sharp wit, fascinated them. Early on, I learned they didn’t do things the same way I, my family, and my Black friends did. My classmates’ and teachers’ ways weren’t better. They were just different. My classmates and I came from other parts of the country — Massachusetts, Illinois, Florida, Michigan, and Alabama. But despite those differences, we all liked catered pizza on Thursdays, skating parties, and P.E. Truth be told, I never enjoyed Phys Ed, but it was an escape from being in a classroom. Some of us liked Mrs. Trzaskus’ kolaczki (Polish fruit-filled pastries), and some of us didn’t. And none of us enjoyed getting punished by our parents, doing homework, or the crabby former nun who taught science.

The Many Lives of Toni Morrison: Always, Forever, Today

Show of hands. Who loves Toni Morrison? Nice! With novels like The Bluest Eye, Sula, Song of Solomon, Beloved, and others — how can you not love the genius revealed in the Pulitzer Prize winner and Nobel Prize laureate’s writing.

We partnered with a few of our friends — Sylvia Wohlfarth, Sharon Hurley Hall, Sabrina Bryant, Sherry Kappel, Terra Kestrel — to honor Toni and her work in a mash-up of compelling articles and beautiful imagery in OHF Magazine, Issue №3, entitled “The Many Lives of Toni Morrison.”

The best part? This stunning 36-page magazine is available to download for all of $10. If it sounds like we’re excited about this, it’s because we are. This issue is an unapologetic celebration of Black women, their resolve, relationships, resilience, and joy in a world that too often fails to give them their flowers.

Want to read a little more about the issue? Boom. Want to go straight to the shopping cart? We gotcha! Download your copy, kick back, give it a read, and let us know what you think!

by The OHF Weekly Editors

OHF Weekly (Our Human Family Weekly) is the newsletter of Our Human Family, Inc., a 501(c)(3) nonprofit corporation with the vision to foster conversations about racial equity, allyship, inclusion, and equality. Our goal is to unite the world by dispelling the lie of race and the practice of racism and replacing them with the truth of love and racial equity.

Articles published in OHF Weekly fall under this vision of racial equity, with well-written, fresh, lively, and human-centered creative nonfiction stories that give our readers a deeper understanding of the myriad manifestations of the human spirit.

To submit a draft to us for possible publication, follow the instructions at OHF Weekly. 
OHF Magazine, Issue No. 3: The Many Lives of Toni Morrison 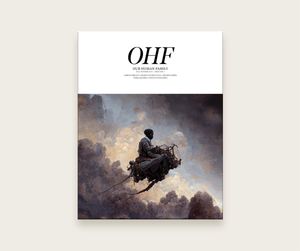