OHF WEEKLY, VOL 4 NO 10: Clay Rivers on the need to drop anti-Black bigotry, embrace our differences, see one another as people, and recognize how much we have in common

What a time to be alive. What a time. The situation in Ukraine is dire. One million people have now fled from Ukraine since Vladimir Putin’s unprovoked military assault on Ukraine. Forty actual miles of Russian troops have surrounded Ukraine on three sides and seized one city, on their way to Kyiv, the country’s capital.

NATO allies have enacted their harshest sanctions against Russia. International companies are ending deals with Russia, airlines have ended flights in and out of Russia. Oil companies have pulled out of contracts and are ending future projects. Nations are freezing and seizing the material assets of oligarchs close to Putin to get them to put the squeeze on Putin. Even Switzerland, Switzerland, put their longstanding international policy of neutrality on pause for a “hold my beer” moment and began sending munitions to Ukraine.

Ukrainian women and children are allowed to leave the country if they choose, but all men between eighteen and sixty are required to stay and defend their country. As of this writing, over a million people have fled west to Poland and other parts of Europe. The remaining people of Ukraine have dug in their heels and are fighting for their freedom and autonomy to self-govern.

America in general, and white folks in particular, are all about life, liberty, and the pursuit of happiness unless those asserting their right to self-rule are Black, Indigenous, or People of Color.

The International Criminal Court is looking into accusations that Russia has committed war crimes, crimes against humanity, and genocide. It’s bad. Union General William Tecumseh Sherman was right—war is hell.

Ukrainian flags are ubiquitous across social media and network news. Landmarks around the globe are lit up in the colors of the Ukrainian flag. Chef and humanitarian José Andrés is at the Polish-Ukrainian border supervising the Eastern European location of his World Central Kitchen serving meals to thousands of Ukrainian families. Ukraine’s president, Volodymyr Zelenskyy, is proving to be the hero his country needs right now despite his beginnings as an  actor, dancer, and comedian. When offered safe passage out of Kyiv, Zelenskyy responded, “I don’t need a ride, I need more ammunition.”

As a result of Putin’s actions, Russia is now an outcast on the world stage.

And America has a front-row seat to witness the carnage and to cheer on the democratic David against the bigger, badder authoritarian Goliath. As well we should, even if our 2021 Democracy Index rating has slipped again for the fourth or fifth year in a row.

America in general, and white folks in particular, are all about life, liberty, and the pursuit of happiness unless those asserting their right to self-rule are Black, Indigenous, or People of Color. Watch one minute of this James Baldwin clip. He says it far better than I ever will.

Is he right? Of course, he is.

What follows is a starter list of Black massacres in North America:

You’ll have to forgive me if my support for the Ukrainian people is not at a fever pitch. I’m a bit preoccupied with all the work America has yet to do at home.

The trend continues around the world. When Black, Indigenous, or People of Color stand up for their own autonomy or rights, many Americans are quick to exact retribution or look the other way because they can’t identify with “Blacks.” For some reason, they just can’t seem to see Black people as people.

This disparity in justice continues today. If the moral arc of the universe bends toward justice, then it swings like an erratic pendulum between accountability and travesty where racial equity is concerned in America. One need look no further than the court cases of the last twelve months.

A jury found Gregory McMichaels, Travis McMichael, and William Bryan guilty of murdering Ahmaud Arbery and sentenced them to life in Georgia state prisons. This verdict shocked me. Minutes before the verdict was read, I prepared myself for all three to walk.

Such a thing isn’t unthinkable, what with the murders of Trayvon Martin and Emmett Till for starters. Their murders weren’t that long ago, 2012 and 1955 respectively, with hundreds more occurring since. In both trials, the killers walked without punishment. After the trial and not guilty verdicts, Till’s killers were paid $4,000 for an exclusive LIFE magazine tell-all interview in which they basically confessed to murdering Till. George Zimmerman walked and went on to have more brushes with Florida residents and the law alike.

But much to my surprise, the predominantly white jury found the McMichaels and Bryan guilty. In a subsequent federal trial, a jury found the three guilty of violating Mr. Arbery’s civil rights. Yes, the jury got it right, but this is not the norm.

Who can forget Aunt Bea, also known as Kim Potter (the former Minneapolis police officer on trial for the murder of Daunte Wright), who while on the witness stand clad in a matching butter-yellow sweater and floral print blouse burst into tears on the stand when questioned by defense counsel?

I, for one, thought surely no Minneapolis jury would have sent Aunt Bea up the river. Officer Chauvin? Sure, that was a no-brainer. The whole planet saw Chauvin’s criminality as the volitional murder it was. But a tearful Aunt Bea? Even without a strawberry-rhubarb pie in her hands, I figured there was no way a predominantly white jury would ever find her guilty.

We need to drop the anti-Black bigotry, embrace our differences,  see one another as people, and recognize how much we have in common.

In a conversation with a friend, I professed my tepid sympathy for Potter’s situation, in the spirit of keeping it real. To which she confided that she felt a little sympathetic towards Potter. My response was, Of course, you can identify with her. You’re a blond white woman. You can probably visualize yourself on the witness stand . . . law enforcement career and firearms notwithstanding. But I hoped the jury would come to an objective verdict.

They found Potter guilty of two counts of manslaughter. Stunning. Chalk one up for accountability.

But the openly understanding judge all but neutralized Potter’s conviction by reducing it to two years, well below the sentencing guidelines’ recommended seven. Potter will serve fourteen months at the most unless she shanks a fellow inmate in the big house. Even so, you know there’s a lenient judge ready to do Aunt Bea a solid and shave off a little more time.

Is it just me, or does it strike anyone as weird that Black boys get murdered on the spot for playing with toy guns but white boys get set free for walking the streets with an automatic weapon and killing two people?

I bring all of this up not to perpetuate division but to point out the hypocrisy in this country. We need to drop the anti-Black bigotry, embrace our differences,  see one another as people, and recognize how much we have in common. I’ve said it before and I’ll say it again—we all want the same things: to be accepted, understood, and loved.

Enslaved Black families torn apart were equally as traumatized as white Ukrainian mothers and children who escape to safety and leave their menfolk behind. Were Ocoee residents shell-shocked and traumatized when white supremacists burned their homes and farms to the ground and chased them from their land for exercising their right to vote?

My guess is yes, probably just as much as the residents of Kharkiv are shell-shocked and traumatized by having their homes bombed and being forced to flee Putin’s army.

As the saying goes, some days you eat the bear, some days the bear eats you. If that’s true, Black folks have been living on a bear-deficient diet that falls short of the ethical requirement of justice.

More about and by Clay Rivers

It’s Not a Sprint, It's a Marathon

America is in this weird place. On the one hand, we make small advances in being a more equitable society. On the other hand, we take massive steps backward, returning to habitual practices that denigrate Black, Indigenous, and People of Color.

Our Human Family is committed to racial equity, allyship, and equality. We know the changes we seek won’t come overnight. We’re in it for the long haul, but we can’t achieve our goals without you.

Please consider supporting us with a one-time or monthly tax-deductible donation to Our Human Family. Thank you.

Top image by thinko on deviantart.com 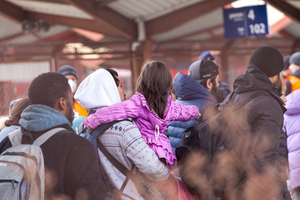 
Racism and White Privilege at the Ukrainian Border 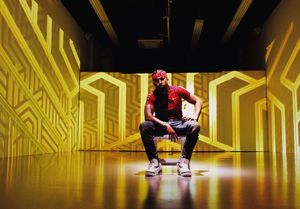